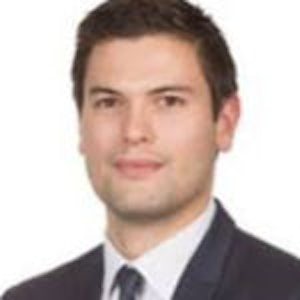 Some investors historically have seen Japan’s equity market as a constant source of disappointment. I can understand why. For 20 years, after Japan’s asset bubble burst and through the global financial crisis in 2009, it was a trader’s market. You could make money by following an active management approach and focusing on individual companies with attractive prospects – and ignore large parts of the market. Alternatively, you could trade the market as a whole, but in doing so you had to time your investment well and not stick around for too long.

However, things have changed over the past decade. While the market has at times been volatile, returns have been attractive. Furthermore, it is hard to argue that Japan has been a disappointing market over this time period. Over the past 10 years, while lagging behind the US, Japanese equities have outperformed other regional markets (Figure 2).

Source: Bloomberg, as at 30 June 2021. All regional indices are showing the net, total return price

Why this change in fortune?

After its asset bubble Japan was an expensive market – it had to derate for two decades just for valuations to trade in line with other regional markets. But over the past decade this significant headwind has been removed (Figure 3).

The market can therefore move more closely with earnings growth, which has been strong. There are many reasons for this, but we believe two especially powerful drivers have emerged over the past decade. The first is a drastic improvement in corporate governance, which has pushed management teams to focus on returns on capital. The second is labour shortages, which have caused Japanese companies to right-size their workforces when, previously, they had retained labour in line with a culture of lifetime employment. Now companies can focus on what they do best and improve productivity, as opposed to running low-margin businesses to cater for this excess labour.

These structural changes have contributed to improved returns on capital and profit margins. Corporate Japan has always had fantastic technology and been great at making innovative goods that the world needs – now it is getting better at doing this profitably.

Nevertheless, Japan has underperformed other equity markets so far in 2021 – although it remains an outperformer of other global markets over the past decade despite this recent relative weakness. So what is going on? 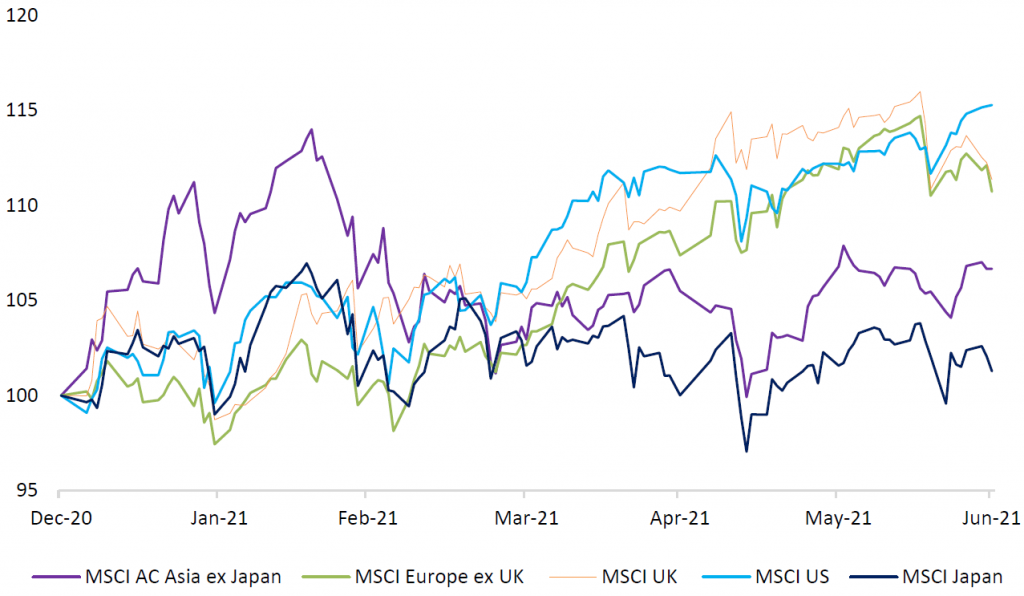 Source: Bloomberg, as at 30 June 2021. All regional indices are showing the net, total return price

One factor impacting Japan is the divergence in the outlook for earnings compared to other markets. Japanese corporate earnings grew strongly in the first quarter of 2021 – according to Bloomberg, Topix Index earnings before interest and tax (EBIT) grew 2.6x year-on-year but also 18% versus Q1 2019 (before earnings were impacted by the global coronavirus pandemic in 2020). The latter is similar to the US, where S&P500 earnings increased 17% versus Q1 2019.1

We believe cautious earnings guidance by Japanese corporates has weighed on analyst expectations. Most Japanese companies have March financial year-ends and therefore guide for the following year when they release January-March quarter results in April or May.

This year, at the time when Japanese companies were building their forecasts, the outlook for economic conditions was unclear as virus cases were rising in Japan and many other countries. Since then vaccine rollouts have progressed well in the US and Europe and business sentiment has improved. We therefore believe that the earnings guidance set by Japanese management teams will prove to be very conservative, and that there is upside to consensus estimates.

Another factor that has weighed on sentiment for Japan is also related to Covid. Japan’s death rate has been low versus major Western economies, but the vaccine roll-out has been faster in the US and Europe than Japan and they are further down the path of reopening their economies. As of the end of April, less than 1% of the Japanese adult population had been vaccinated. This compared to more than 30% in the US. Japan has almost constantly been in lockdown this year, and this has weighed on its economy. However, the outlook from here seems brighter.

After a slow start, Japan’s vaccine rollout has accelerated drastically in recent months. The government plans to have all people over 65 vaccinated by the end of July, which is important given almost 95% of deaths have been people over the age of 60. There is a lot of nervousness around the spread of Covid due to the Olympics, which ran from 23 July to 8 August, and Tokyo’s state of emergency was extended to cover this period. But thereafter we believe the stage is set for Japan’s economy to gradually reopen. 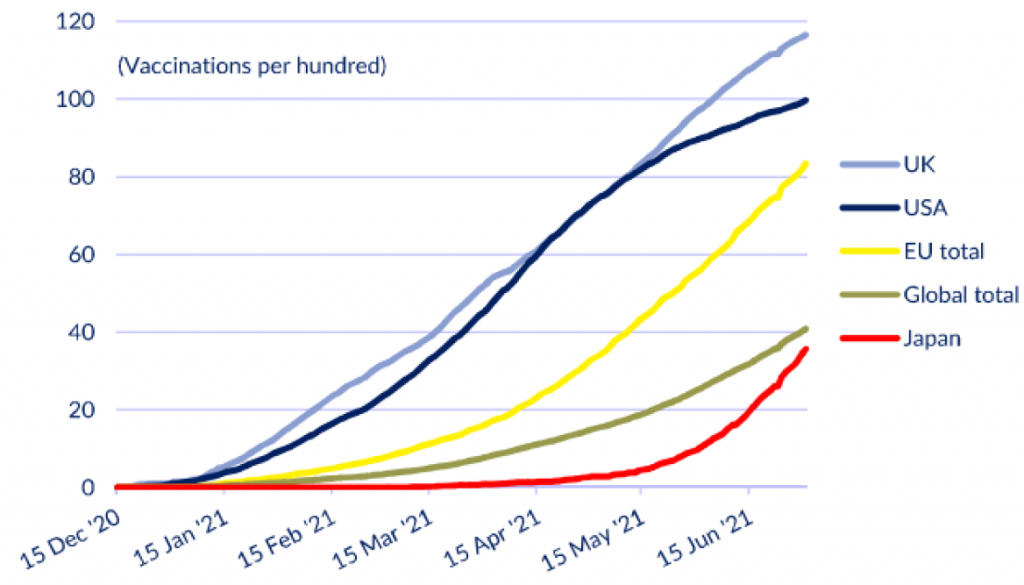 Positive progress for the prime minister?

A third source of uncertainty this year is unique to Japan: its political situation. An election must be held by 21 October. Prime Minister Suga’s popularity has waned this year on perceived poor handling of the Covid crisis. We believe the strong momentum behind Japan’s vaccination efforts will continue and that its economy will be well positioned to gradually reopen once the Olympics have finished. This could give Suga the boost he needs to win the election.

We believe the long-term prospects for Japan’s equity market remain favourable, given its attractive valuations and the backdrop of a continued structural improvement in returns on capital. The days when Japanese equities consistently underperformed other markets are a distant memory. There will inevitably be bumps in the road, as we have seen this year, but Japan has many great companies that are global leaders in their areas. You can’t keep them down for ever. As always, we will follow these companies closely and look to add them to portfolios when we believe the time is right.

Alex Lee started his career in 2007 at Canada Life where he runs Japanese equity funds using a value and contrarian investment style. Alex studied economics at the London School of Economics and is a member of the CFA. Based in London, outside of fund management he enjoys football and chess.

We make no warranties, representatives or undertakings about any of the content of this website (including without limitation any representations as to the quality, accuracy, completeness or fitness of any particular purpose of such content, or in relation to any content of articles provided by third parties and displayed on this website or any website referred to or accessed by hyperlinks through this website.

Alex Lee started his career in 2007 at Canada Life where he runs Japanese equity funds using a value and contrarian investment style. Alex studied economics at the London School of Economics and is a member of the CFA. Based in London, outside of fund management he enjoys football and chess.