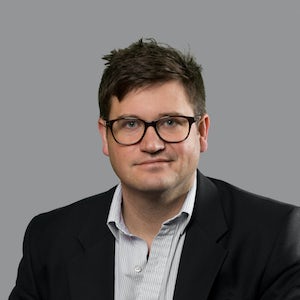 Investing in the UK’s banks has been a volatile experience in recent years; but Ambrose Faulks is optimistic on the outlook for the sector. He examines the factors he believes represent a sea change in prospects for the UK’s unloved banks.

It sometimes feels as though investors have given up on the UK’s banks. Indeed, any fund manager with less than 15 years experience in the UK market will have never seen banks outperform for more than a few quarters. Bank equity has over this time provided a volatile ride, with at times unwelcome surprises along the way. The only consistency being the long-term downward trend in performance. Ignoring the sector, and not owning it has on the whole been a profitable strategy. The headwinds for the sector since the credit crunch are well known: 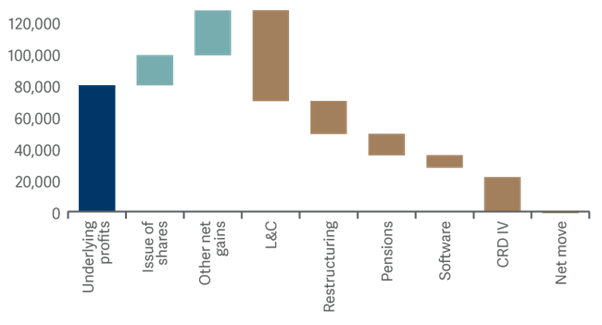 Source: Numis as at 10 January 2022. Includes Barclays, Lloyds and NatWest

Looking forwards we believe there are reasons for more optimism, as these headwinds either abate, or reverse. Litigation and conduct charges are likely to remain an on-going cost to the sector, although we expect them to be significantly smaller in future. On the capital front, the rebuilding has been completed, a return to the dividend list and announcement of share buyback programs from the five largest UK quoted banks are evidence for this. Lastly the interest rate cycle is turning – we believe this will benefit the profits of the banks, and in time the multiple they trade on. Together these factors represent a sea change in prospects for a long-unloved sector.

What could go wrong?

The inherent leverage on the banks’ balance sheets, combined with their loan exposure to consumers and corporations by definition makes them highly geared into the fortunes of the UK economy. It is clear that over the last few weeks concerns around the war in Ukraine and the much publicised ‘cost of living crisis’ has seen sentiment on the outlook for the UK economy become increasingly pessimistic. This in turn has weighed on bank shares.

Many commentators are talking up the prospect of stagflation – low economic growth in a high-inflation environment. We would note that of the headline inflation of around 7% today, roughly 3% is coming from energy prices. This is likely to drop out once recent rises start to annualise. Given the enormous surplus of excess deposits that built up during the pandemic (UK consumers added £225 billion to their banks accounts during the pandemic) and the propensity for Anglo Saxon customers to borrow, we maintain that whilst this burst of inflation is unfortunate, it can be bridged by the UK consumer through savings, higher earnings and in some cases more borrowing.

And as for loans? There are two key points to make about loans going ‘bad’. Firstly, if loans do go sour – we must ask what sort of collateral they are secured against – loans to values of housing look sound, particularly given the rise in house prices over the last two years. In consumer unsecured credit, banks enter this year with materially smaller loan books as consumers have spent the last two years paying off their balances at a record pace. The opposite trend to what would be seen in a typical consumer led boom to bust recession.

Lastly, and most importantly, the best predictor of defaults has been employment. As long as borrowers have jobs, they tend to make their loan repayments. The current strength of the jobs market (low unemployment and well in excess of a million unfilled job vacancies) combined with the conservative positioning of the consumer loan books coming into this year, gives us confidence that any forthcoming impairment cycle will be manageable for the banks.

Looking further ahead one has to be cognisant of the threat of disruption from new entrants. Indeed many Fintech ‘Unicorns’ (start-ups with a valuation of over £1bn) have been born from the promise of disrupting a small but highly profitable part of the bank’s operations. Foreign exchange for UK consumers would be an obvious example. There will be more to come and while we acknowledge the generational changes in habit that are occurring, we don’t see ‘Buy Now, Pay Later’ as representing a meaningful threat in the near term. The banks themselves are adapting and many of these models have relied on cheap funding – something that will get more expensive as interest rates rise.

Indeed the banks have enviable economic moats due to a combination of long-established current accounts (‘primary relationships’) and scale. Challenger banks struggle to compete with these holy grail current accounts, particularly in a rising rate environment, as they provide a cheaper source of funding for loans. Although some customer data can be bought, the incumbents extensive customer data and pre-eminence in credit cards will remain unparalleled for some time.
The established banks also have scale. While some legacy IT systems undoubtedly need to be modernised, they also have meaningfully broader businesses to amortise these costs against. Not least, these economies of scale also make ongoing investments in cybersecurity more digestible – and scale helps with proper regulatory oversight and relationships.

Any bad news is (more than) priced in

As ever, the starting point for making any investment is how much you must pay for it today – and what you think it will be worth henceforth. Today, the UK’s large domestic banks trade on multiples of just 0.5x~0.8x their net tangible assets. This could imply numerous things.

First, it might imply doubts as to whether they can earn an economic return on their assets. We believe they can. Indeed, if investors were to plug the interest rates currently being implied by the bond market into their valuation models for banks, their shares would look even cheaper. If as a shareholder I buy a bank today making a 9% return on equity, for 0.5x book (50p in the £). The actual return I am seeing on my equity investment into the shares is closer to 18%.

Second, these low multiples might imply a question as to whether these businesses have enough capital. Given that the banks have all announced meaningful share buyback programmes, this doesn’t seem the case. So there would seem to be a huge amount of bad news being priced into these shares.

Mean reversion is one of the few constants in financial markets. If you believe in it, you ought to be looking at the banks. A sector trading on close to a trough multiple and where current interest rates mean that returns on capital today are closer to the bottom of the cycle than the top. After a disheartening decade, they are under-loved. In our view, they are cheap. The backdrop is changing, with earnings upgrades to come as interest rates rise. Today, banks are over capitalised and using a portion of that capital to buy back their own shares. Why aren’t other investors following their lead?

Well… some of us are. The Artemis UK Select Fund currently has holdings in Barclays, NatWest, Standard Chartered and VMUK.

FOR PROFESSIONAL AND/OR QUALIFIED INVESTORS ONLY. NOT FOR USE WITH OR BY PRIVATE INVESTORS. CAPITAL AT RISK. All financial investments involve taking risk which means investors may not get back the amount initially invested.

Ambrose works with Ed Legget managing Artemis’ ‘UK select’ strategy. He graduated from Oxford in 2005 with a masters in chemistry and joined the research department at Odey Asset Management. As an equity analyst, he focused first on banks, diversified financials, property and housebuilders, then on software and IT services. Ambrose moved to Artemis in 2013 and is a CFA charterholder.